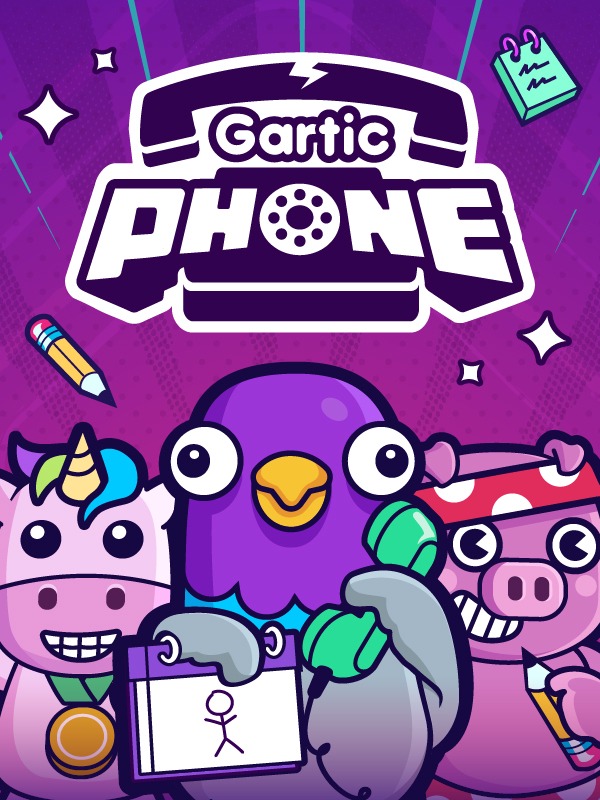 GarticPhone is a virtual version of the traditional “Telephone Game” or “Chinese Whispers”, published by Onrizon Social Games and playable via web browser on their website. As a fusion of the game, Gartic, also by Onrizon, and the classic Telephone Game, GarticPhone uses Gartic’s drawing tools and the mechanics of the Telephone Game, which traditionally only deals with messages, in order to introduce more variables to the sentence’s interpretation. ‍ The base game mode has players type a sentence each. This sentence is then given to another player to draw their interpretation of the sentence. This drawing is then given to another player for them to interpret into a new sentence. Points are given based on how close the subsequent sentences are to the previous one. ‍ With a variety of game modes and the sheer randomness brought forth by each player’s individual artistic talents, GarticPhone is ready to add laughter and hilarity to your voice chats.

Due to the sheer accessibility of the game, it was a simple matter to set up a Zoom call and play the game with each other on the website. Considering the wide range of our team’s artistic ability and the fact that some of us had the misfortune to be playing with a mouse instead of a touchscreen, we came into the game expecting to see a lot of stick figures and undefinable shapes. We were not disappointed. As mentioned, we played the game on a Zoom Call and while we reacted appropriately to the sentences and pictures given to us (read: laughter), there were some down times when we were finished drawing and was just waiting for the timer to run down. This was fixed in future games when we figured out that we can change the settings for the timer. ‍ As the game went on, with memorable sentences such as ‘Peter Parker Picked a Peck of Pickled Peppers’ and ‘Pikachu Arrested For Money Laundering’ coming up, we realized one major downside to the game. It was exhausting. ‍

I wouldn’t say it was repetitive since the variable nature of the game makes every sentence and drawing a new experience, but about an hour or so of playtime left us simply going through the motions, with the high points, the parts at the end where all the sentences and pictures are presented, still managing to evoke hilarity. ‍ The scoring system on the other hand was unclear at best and arbitrary at worst. We never managed to figure out exactly how the game determines if something matches a previous contribution. Due to this, the game never truly brought a sense of competition to the table, with the score counts at the end bringing nothing but short comments of someone getting a point at times.

GarticPhone does its job as a social game and does it well. It offers a bout of enjoyment for a video call or a voice chat and gives the chance to see how each participant interprets visual and written cues. It is easy to imagine this game as a go-to activity for remote team workers during short breaks to inject some levity in their remote space. ‍ However, the arbitrary scoring system makes it a poor match for those who are looking for more competitive games and the game does get a bit tiring if played for several hours straight. ‍ As far as our unprofessional opinion goes, it is a perfect game for lunch breaks but not for whole day gaming sessions.