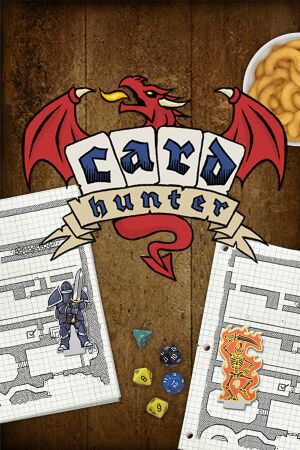 Card Hunter is an online game that blends the together deck building, turn based tactics, character creation and classic fantasy role-playing into a game with the aesthetics of a tabletop role-playing game. It was first released in 2013 as a web-browser based game and its development team featured big names such as Jonathan Chey, who co-founded Irrational Games and directed the development of Bioshock; Joe McDonagh, who was a co-winner of GDC’s 2007 award for Best Writing in a Video Game for Bioshock; and Richard Garfield who created Magic: The Gathering, a relatively popular trading card game that some of you might have heard of.

The Woolfie Team, as some of you might have an inkling, is comprised of people who have dipped their toes into tabletop games, have a fondness for video games and may have a couple of Near Mint Alliances Force of Will cards hidden in a vault somewhere. Suffice to say, Card Hunter, despite its age and its origins as a web-browser game, was destined to be a part of the Woolfie Adventure.

While the game can be played alone, with the player fielding a well-oiled party of three characters that they have designed and built up from scratch, it wouldn’t be a proper Woolfie experience if we didn’t play multiplayer with one character each and show case an utter disregard for communication. Hence, the Woolfie Party was born, consisting of two Elf Mages and an Elf Warrior.

Now, Elves in this game are extremely mobile, featuring movement cards that lets them cover half the battlefield. They are also squishy, and really flammable. Having two mages with a penchant for area of effect fire spells was probably the worst decision that Stevia’s Elf Warrior could make.

Card Hunter brings forth a sense of nostalgia, combined with enjoyable tactical game play and the satisfying feeling of character progression that a tabletop RPG brings. While the game may involve a lot more reading and a lot less action than some people might want in an RPG, it is still a pleasant tap of the nostalgia hammer for those of us who have experienced the joys of converging into a friend’s house with nothing but miniatures, dice, cards and Mountain Dew to amuse us.